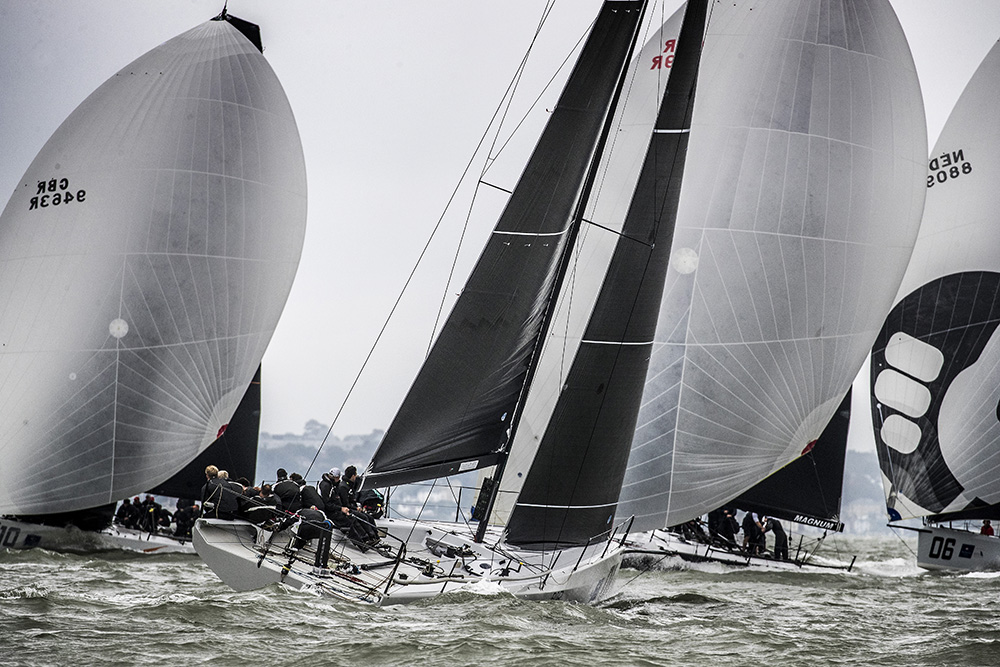 Cowes, September 21 September, 2017. The HYS One Ton Cup, hosted by the Royal Yacht Squadron, the One Ton Cup was created in 1899 by the Cercle de la voile de Paris (CVP).

Three Windward Leeward races were fired off in quick succession by PRO Stuart Childerley and his team. Racing was held in the central and eastern Solent, with a southwesterly breeze averaging 15 knots, and gusting over 20 knots. Subtle wind shifts, and influential extra pressure in the gusts, kept tacticians on their toes. Six of the 12 strong fleet made the podium during the course of the day, with exceptionally tight racing- the DNA of the FAST40+ Class. Peter Morton’s British CF40+ Girls on Film, took two race wins to lead after the first day. Stewart Whitehead’s British Carkeek MkIII Rebellion, finished the day in second place, just a point ahead of Steve Cowie’s Scottish GP42 Zephyr, who scored podium finishes in every race.

“It was a shifty day, and you had to wait for the shift to come to you. Sometimes you have to take a bit of a hit before you get that lifting pressure.You had to be patient today. We are confident with the boat, and Dave Lenz did an exceptional job on tactics; he put us in some good positions, and the crew work was brilliant.” – Peter Morton, Girls on Film.

“We are pleased with today’s results, the team worked really hard on boat speed, and we got some good starts. There is always room to improve in this class, and we are just one day into the regatta, so we hope to do even better tomorrow.” – Stewart Whitehead, Rebellion.

“Good starts and keeping it simple worked well for us. The crew work was good, and we started well. The boat speed downwind was excellent, especially as it was a puffy day with the breeze coming over the island. A great first day, and we hope to keep up that level for the regatta.” – Ian Budgen, tactician Zephyr.