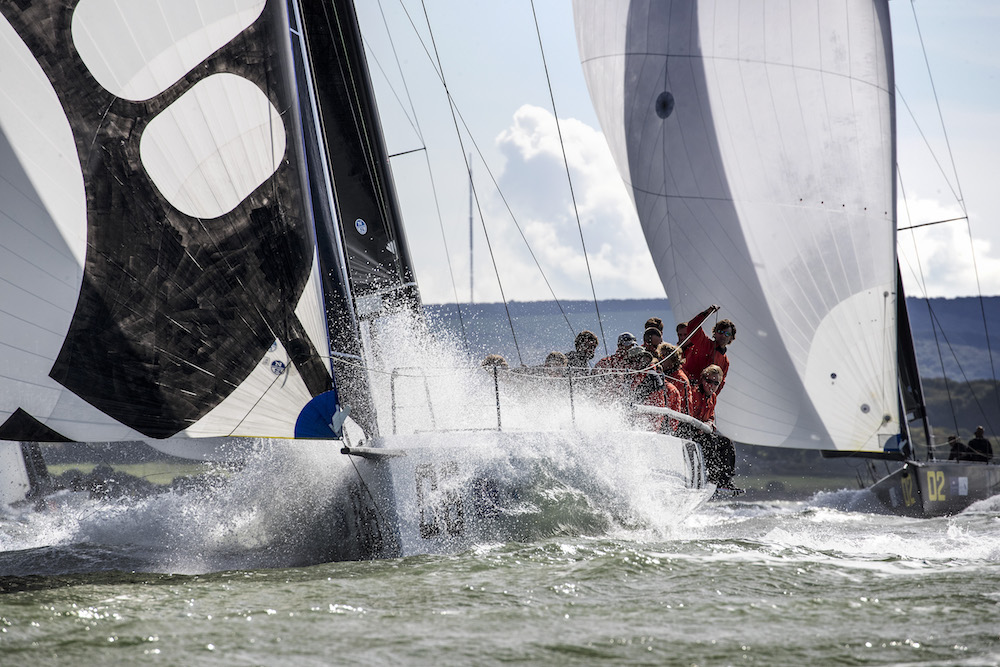 Cowes, September 22 September, 2017. The HYS One Ton Cup, hosted by the Royal Yacht Squadron, the One Ton Cup was created in 1899 by the Cercle de la voile de Paris (CVP).

Two longer round the cans races produced a different dynamic to the HYS One Ton Cup on Grapefruit Graphics Race Day. After a short postponement, a southwesterly breeze arrived at midday, piping up to 15 knots and gusting up to full on planing conditions by the close. The keys to a top performance today were sailing in clean air, calculating the best use of a Spring Tide, which turned during the action, and nailing a myriad of different sail combinations. Both of today’s races were weighted and non-discardable, with Race 4 having a reaching start.

Peter Morton’s British CF40+ Girls on Film, scored a win and a second, to place one hand firmly on the One Ton Cup. Bastiaan de Voogd’s Dutch Carkeek Mk3 Hitchhiker, matched Girls on Film’s score line, to move up to second place for the regatta, tied on points with Stewart Whitehead’s British Carkeek MkIII Rebellion. Steve Cowie’s Scottish GP42 Zephyr, continues to impress, scoring two impressive results to finish the day just a point behind Rebellion. Sir Keith Mills’ British Ker40+, with Alex Mills on the tiller, had a more consistent day, and move up to fifth.

“Sailing around the cans suits the team and the boat, and that synergy gave us the opportunity to do well today. We got some good starts, we sailed in free wind and the boat handling and sail selection was right, and that is what kept us ahead of the competition. Girls on Film is so fast upwind, but at times we were quicker down wind today.” – Bastiaan de Voogd, Hitchhiker.

PRO Stuart Childerley, explains the objectives for today’s two round the cans races. “Today’s courses were designed to test different skill sets for both the crew and the design of the boats. The breeze was still a little unstable for the first race, and so the emphasis was on boat handling. The wind had steadied down for the second race, and the emphasis was more about strategy with the tide and the wind. Especially as racing around the cans in the Solent means that land effects can come into play. For both races sail choice was also a factor.”