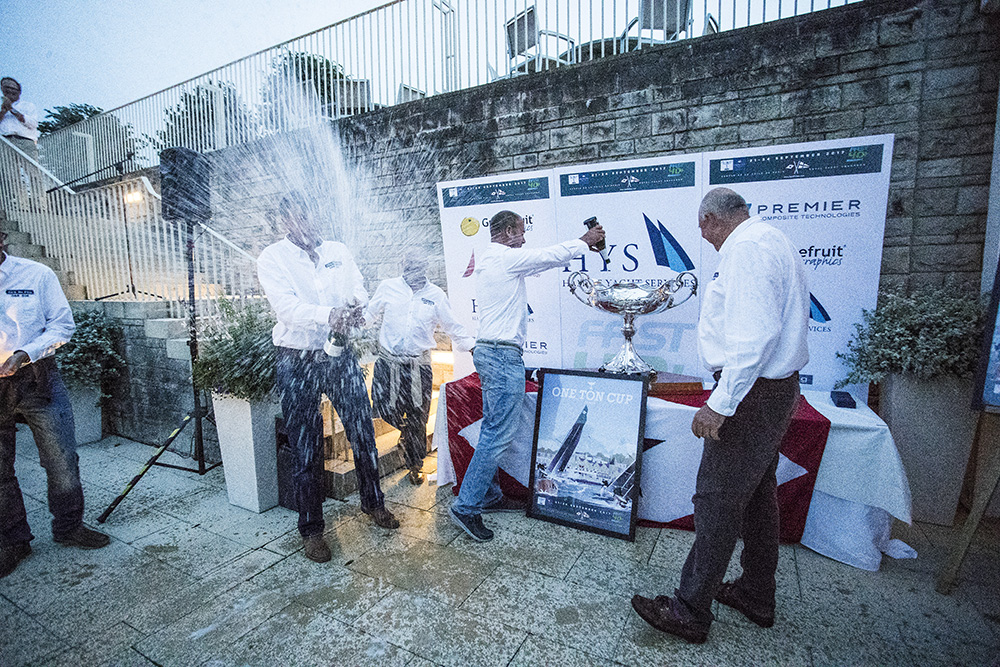 Three races on Premier Composite Technologies Race Day, produced a nerve jangling finish to the HYS One Ton Cup. Bright sunshine and a shifting southerly breeze produced a highly strategic finale, before Peter Morton’s CF40+ Girls on Film, retained the HYS One Ton Cup, the first team to do so since 1993.

“We started conservatively for the first race of the day, and in this fleet that didn’t go well.” admitted Girls on Film navigator, Nat Ives. “We rounded the first mark in last position. Stuck in traffic, we had to claw our way back and in the end fifth was a keeper. We could have lost the regatta, there and then.”

British Ker40+ Invictus, with Alex Mills driving, romped into a big lead, and with Olympic Gold medallist, Giles Scott calling tactics, scored an impressive victory. Heinz Peter Schmidt’s Silva Neo was second, and Rebellion third. The winner of the HYS One Ton Cup, hang in the balance. The final race of the HYS One Ton Cup was won by Tony Dickin’s GP42 Jubilee, Rebellion was second, and Invictus was third. The weighted races, added serious thought to the mathematics, before Girls on Film was declared winner of the HYS One Ton Cup. Stewart Whitehead’s Rebellion was runner up, just 1.5 points ahead of Bastiaan de Voogd’s Hitchhiker.

“The fleet is incredibly close, there are seconds in it. I feel honoured really, when I was growing up in sailing it was a massive trophy, and just look at the previous winners. I started to try and win it in 1982, and I have lost it more times than I have won it. So this is a special moment. Thank you to the Royal Yacht Squadron for putting on three days of fantastic racing. The two most important groups for the One Ton Cup, are my fellow owners for putting on such great competition, and my fantastic crew.” – Peter Morton, Girls on Film.

“It was great, we had so many great varied courses indifferent types of conditions. It was breathtaking, on the edge, a real challenge but we are still laughing – it was a lot of fun.” Bastiaan de Voogd, Hitchhiker.

“We have identified consistency as a key goal. We know we are quick, but that consistency was not good. We have focused on trying to stop the bad races. We have had a settled crew and by moding the boat, getting good starts, and keeping it simple, we have cut out the big mistakes, and sailed cleanly. To do all that you have to get lots of details right. For the One Ton Cup, our worst result was fourth, that is something that we did not achieve last year.” Stewart Whitehead, Rebellion.

On behalf of the Royal Yacht Squadron, Colonel Tony Singer welcomed competitors and officials to the HYS One Ton Cup Prize Giving, generously supported by Diverse Yachts. Colonel Singer rightly commended the race management team led by Stuart Childerley, which received a special round of applause. Every FAST40+ owner competing was announced, and presented with a framed poster commemorating the HYS One Ton Cup. On behalf of title sponsor Hamble Yacht Services, Bertie Bicket commended race day sponsors, TT Rigging, Grapefruit Graphics and Premier Composite Technologies, and sub-sponsors, Diverse Yachts, Henri Lloyd, and North Sails. “I would also like to thank all of the owners, and crew, for throwing everything in to get your hands on the One Ton Cup. There can only be one winner, and no one would begrudge what has been such a well deserved result, congratulations, well done.”

The President of the Cercle de la Voile de Paris (CVP–Paris Yacht Club), Hervé Godest, presented Girls on Film with the One Ton Cup. “Modernity and Tradition – The One Ton Cup is in good hands, the FAST40+ yachts are highly technical, and very powerful, and it is wonderful that the One Ton Cup, has returned to Cowes, nearly one hundred years since it was last here.”

The final round of the 2017 FAST40+ Race Circuit will take place 14-15th October, as part of the Hamble Bigboat Championship, organised by the Hamble River Sailing Club.