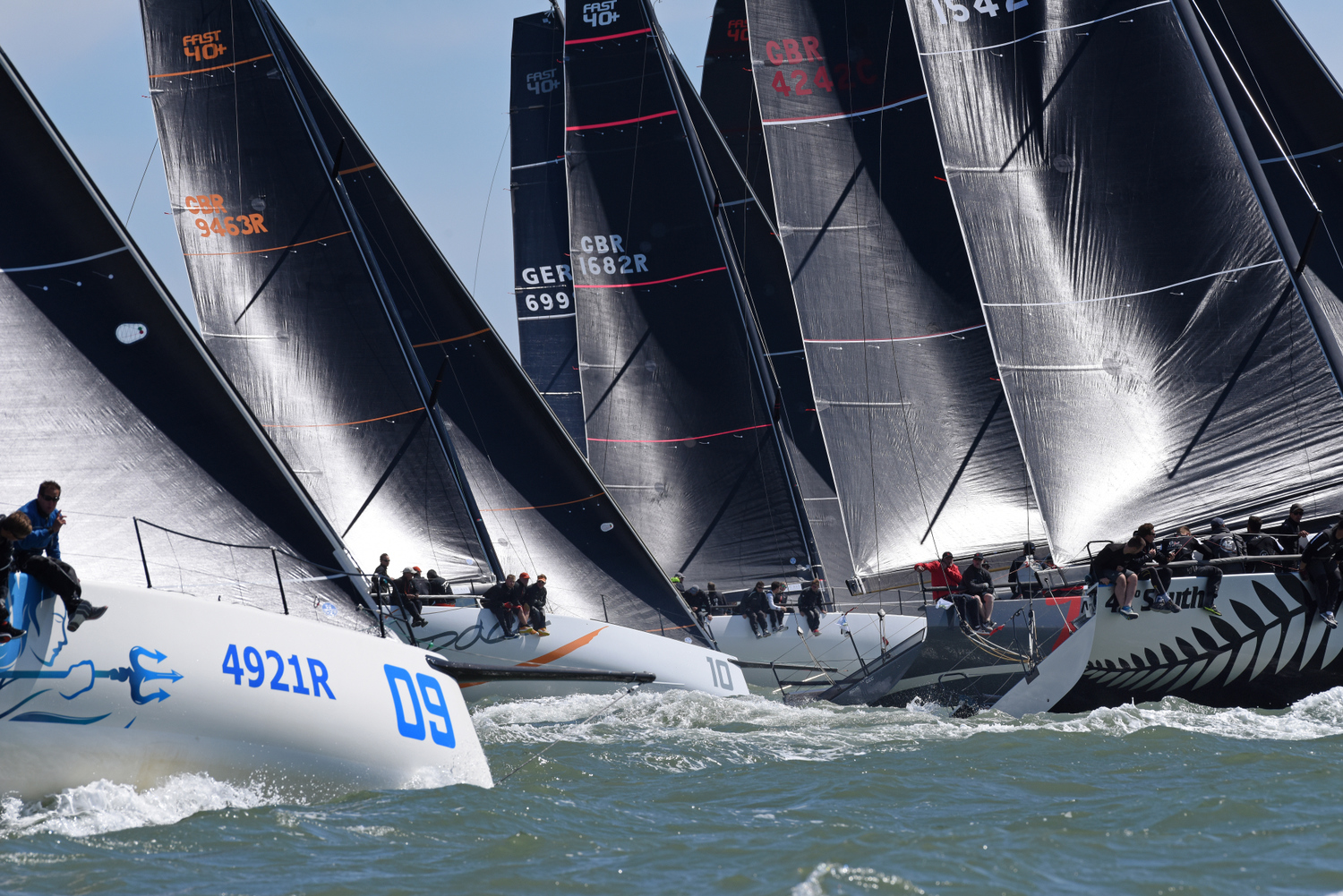 Peter Morton’s brand new Carkeek MkIV Girls on Film will be racing for first time. In his previous boat, also called Girls on Film, ‘Morty’ won the 2016 FAST40+ Race Circuit and is the defending FAST40+ IRC National Champion. However, this year, the Isle of Wight based team has it all to do.

Starting the campaign late means that we are really going to struggle to win overall, so the One Ton Cup in September will be the big goal. The racing is more competitive this year, and that is why we are in the FAST40+ Class.” explained Peter Morton. “It wasn’t my intention to sell the previous boat, but the Dutch team that bought it wanted to get into the class, and did not want to go through the process of building new and I am keen to see the class grow, so that’s how it happened. The new boat is from the same mold. However, we have made changes to the deck layout. Essentially, we now have the mainsheet trimmer in front of the helm, which is a personal preference, and we have tried to move everything as far back in the boat, wherever possible. The trimming positions and grinder pedestal are aft, as are the primary winches, so that when we gybe, the weight remains at the back of the boat.”

Mark Rijkse’s Reichel Pugh 42 South was in outstanding form for Round 1 of the Fast40+ Race Circuit, scoring four podium finishes to place second for the regatta. 42 South proudly displays the Silver Fern on its hull, signifying Mark’s New Zealand nationality. Mark has never raced a keelboat before, let alone a FAST40+, his previous racing experience was in dinghies.

“The Silver Fern is painted on and is there for good, we have Land Rover BAR Academy’s Rob Bunce in the crew but 42 South is very much a Kiwi boat.” commented Mark. “ We were delighted with our start to the season, the crew work was impeccable and the modifications to the boat over the winter have really improved our potential. The main difference is a new rig, which is much lighter than the original. In this class, just a few inches is the difference between crossing or having to duck a boat, and reducing the weight aloft has made a big difference. 42 South is one of the oldest boat on the FAST40+ circuit, and we have replaced all the systems and sails. We have had to invest in the boat to get it to a level where we can compete with the rest, and the crew have responded to that by increasing their performance, and they are under strict instructions to not hold back, if they think my driving is off the pace. Downwind it’s just exhilarating, upwind its challenging to keep the concentration level up to maintain the numbers. Just as every other FAST40+ team, we have a mixture of professional and amateur crew, but this team all knew each other long before we put the 42 South programme together and that is an important factor. In the last regatta, we turned around some bad results by fighting back, you need a team to achieve that.”

Bendix Huegelmann is part of the young German team racing the Felci designed Silva Neo, the team come from all over Germany, and none of the crew is over 30. In the first round of the 2017 FAST40+ Circuit, Silva Neo was the most consistent team of the regatta, finishing in third place.

“With the team living in Germany and the boat in Hamble, we have limited time to practice. However, the core of the Siva Neo team has been racing together for eight years, and we have good teamwork and systems in place to minimize mistakes. Having a good understanding between the team also means that we can make quick decisions without compromising the execution. So for example, we can make a late decision on which side of a leeward gate to choose, or put in a quick tack. Getting those decisions right and having the ability to execute the manoeuvre efficiently can make a big difference to our performance. The team are really excited to have the opportunity of racing at such a high level, so above all, we are really enjoying the FAST40+ circuit; it is really important to us that there is a grand prix race circuit for boats of this size.”