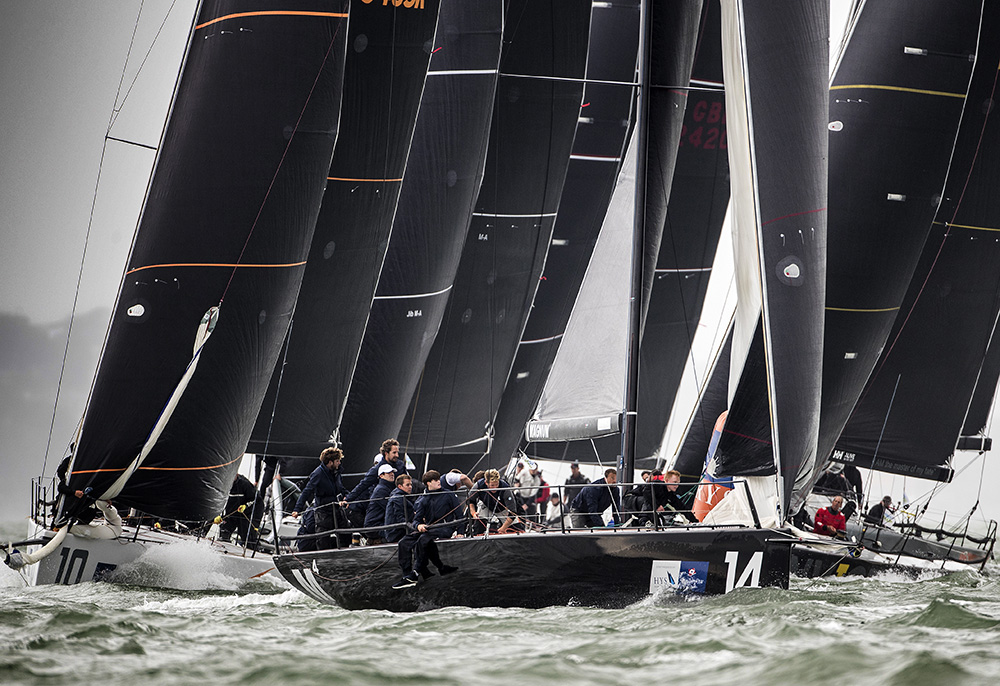 The 2018 FAST40+ Season kicks off this April with ten teams confirmed for the full season, and more for headline events. The thrilling fast-action owner driver class welcomes back its current members, and offers a warm reception to new teams to the circuit, notably Niklas & Catherine Zennstrom’s Rán Racing. The international teams from England, the Netherlands, Scotland, South Africa and Sweden, will take part in the six round FAST40+ Race Series, which includes the FAST40+ National Championship, and the prestigious One Ton Cup. FAST40+ teams will also be competing at other IRC events, both inshore and offshore.

Racing in the FAST40+ Class is incredibly close; last year’s championship was contested over 28 races and after six months of racing, it all came down to the last round of the series, with four teams in contention to be crowned overall champion. Invictus, Girls on Film, Rebellion, and Hitchhiker were all in the frame. Sir Keith Mills’ Invictus won the championship in the very last race. However, for 2018, there will be a new 2018 FAST40+ Circuit champion, as Invictus is taking a year out. Invictus is up for sale, and Sir Keith Mills is looking at building a new FAST40+ for 2019.

Rán Racing are expected to be a hot contender for the 2018 FAST40+ season with a team based in Hamble. The new Carkeek designed FAST40+ is being built in Hythe by Jason Carrington, who is no stranger to the FAST40+ Class, as crew on Girls on Film last year. Rán is due to be splashed in the Spring, and is believed to be focusing on bringing on young sailors into the FAST40+ arena. TP52 and Maxi 72 World Champion, Tim Powell is an integral part of Rán Racing. However, FAST40+ Class rules limit the number of professional sailors to five.

Just in from Tim Powell…

We are building a new Carkeek Fast 40 at Carrington Yachts in Hythe. Hopefully we will be launching just in time for the RORC Easter challenge.

Any team members that you would like to mention?
We have worked with the BKA to try and bring in some young sailors. With the likes of some Rán regulars, Steve Hayles and Adrian Stead, we can use their experience to help bring along this new group.

What are your goals for the season? This might include certain events or be a comment on the ethos of your team.
We obviously want to be competitive but on top of that it is to help bring in a new group of young sailors. It’s very difficult for young sailors to get a foothold in high level racing and the Fast 40’s offer superb cutting edge race boats, a good pro/am mixture of crew and interesting racing from W/L’s to coastal type courses.

Anything else you would like to mention?
Rán is very excited to be joining the Fast 40 fleet in the Solent. We have been watching from the sidelines and recognise the boats as being a lot of fun with a good variety of racing to keep it interesting.

2017 circuit runner up, Peter Morton’s Cowes based CF40+ Girls on Film, has much the same team that won the 2017 One Ton Cup, with the addition of top match racing and 52 Super Series trimmer, Gerry Mitchell. Girls on Film has been undergoing extensive maintenance over the winter months, as Boat Captain Nick Butt explains: “We have been working alongside Lewmar with a new pedestal system, and re-worked some of the systems with Diverse Yachts and TT Rigging. Topsides have been given a birthday and we have made some mods to ease manoeuvres, plus work on the bilge pump system – you can’t stop the water coming in, so you have to be on top of getting it out!”

Stewart Whitehead’s Hamble based Carkeek Mk3 Rebellion, was third last year, and has been in the shed at Hamble Yacht Services for a overhaul of systems and a new paint job. “Most of the jobs are refining the little details on board to get us those all important marginal gains, in the FAST 40+ Class races are won and lost by seconds so every little detail counts. Rebellion is a great team and a cool boat, we are looking forward to this year.” commented Rebellion’s Nick Piper.

Baas de Voog’s Dutch Carkeek Mk3 Hitchhiker came fourth in last year’s circuit, and is confirmed for the 2018 season. However the young German team racing Silva Neo, which managed a credible fifth, are looking for a new project to continue racing in the FAST40+ season.

Tony Dickin’s Farr 42 Jubilee is back, and hoping to improve on their sixth place in 2017, as Gregg Parker explains: “We had a disappointing end to the season losing 4th overall in the last regatta, so we’re aiming to increase consistency and make sure we’re firing on all cylinders come Round One. Jubilee will be out training in March and April, and we have been working on our physical fitness during the winter. We’ve had a couple of crew changes with trimmers shuffling around and a new jib trimmer coming in, 49er Olympian Alain Sign.”

“We will be pretty much the same team as the last season, trying to maintain a 100% Swedish viking crew.” commented Elvis’ Calle Hennix. “Our goal is to focus on boat speed and handling, and hopefully the results will follow. We are really looking forward to tight racing in the Solent.”

Andrew Pearce is recovering from knee surgery and hopes to be back racing his Ker40+ Magnum 4. “I am hoping to be out at Easter with a view to competing in Round Two at Poole. I am President for the International Paints Poole Regatta and instrumental in the FAST40+ Class coming. I hope I will be fit enough to cope with the rough and tumble of a FAST40+ yacht again.” commented Andrew Pearce.